• Seaton Village is a centrally located family oriented neighbourhood.
• Remarkably, this neighbourhood has managed to maintain the feel of a small town village, even though it is situated in a busy part of the city.
• The focal point of this neighbourhood is Vermont Square.
• This city park is the home of the St. Alban’s Boys’ and Girls’ Club, a community agency that offers children and families a variety of social and recreational programs.
• Christie Pits is one of Toronto’s most vibrant multicultural neighbourhoods.
• It has historically been a transitional home for immigrants upon their arrival to Toronto.
• However, as Christie Pits continues to mature and prosper, more people are choosing to stay here rather than move to the suburbs. This stability bodes well for the future of the Christie Pits neighbourhood

• Seaton Village was originally settled by Colonel David Shank and Captain Samuel Smith. Both men were loyalists who served under John Graves Simcoe in the Queens Rangers. In the early 1800’s, the Shank and Smith farm lots were acquired by George Crookshank.
• The Crookshank estate began at the foot of Bathurst Street where it overlooked the lake. A laneway from the Crookshank house ran north to his country farm, where Seaton Village is today. The Crookshank laneway is now part of Bathurst Street.
• Seaton Village is named after Lord Seaton, a former Lieutenant Governor of Canada. The Village was laid out on the old Crookshank farm in the 1850’s. However, residential development of the present day neighbourhood did not commence until around 1888, when Seaton Village was annexed by the City of Toronto.
• The Christie Pits neighbourhood is named after the former Christie Sand Pits, which were a local landmark in this area until the early 1900’s. Christie Street is named after William Mellis Christie, who co-founded the Christie & Brown Cookie Company, in downtown Toronto in 1861.
• The Christie Sand Pits were rich in sand, gravel, and clay deposits – remnants of the last ice age. These deposits were excavated in the late 1800’s and early 1900’s, and used in the construction of many of Toronto’s early roadways and public buildings.
• By 1909, the Christie Sand Pits were depleted and the city turned the former quarry into Willowvale Park. However, the Christie Pits name has endured and is used in reference to the park and the surrounding neighbourhood to this day.

• Seaton Village’s housing stock consists mostly of semi-detached Victorian style houses, built in the 1890’s and early 1900’s. These whimsical houses are shaded by a canopy of storybook silver maple trees that are even older than the neighbourhood itself.
• The streets are generally devoid of cars as most houses have parking off laneways at the rear of the properties.
• Christie Pits has traditionally been a working class neighbourhood. Its houses are modest in size, and the lots are typically narrow.
• There is a good mix of detached and semi-detached houses, built between 1906 and the 1930’s.
• The streetscapes in the neighbourhood are pretty and uncluttered, thanks to rear laneways that provide off-street parking for Christie Pits homeowners.

• Vermont Square is located right in the centre of the Seaton Village neighbourhood. This lush city park is lined with trees, and includes a children’s playground and a wading pool.
• This park is also home to the St. Albans Boys’ and Girls’ Club which has a myriad of programs for families and children including preschool programs, a summer camp, a games room, a computer room, a weight room, a gymnasium, and much more.
• Willowvale Park also known as Christie Pits is a multi use recreational facility that includes one of Toronto’s prettiest baseball diamond.
• This park serves as the home field for the Toronto Maple Leafs Inter-County Baseball team.
• Additional facilities at Willowvale Park include the Alex Duke Memorial Pool and water slide, basketball courts, and a large children’s playground. Winter activities in the park include skating, hockey and tobogganing.

• Bloor Street from Bathurst Street west to Christie Street is the home of Toronto’s Koreatown retail corridor.
• This vibrant shopping area is highlighted by a number of Korean restaurants, Karaoke bars, and Korean food and gift shops.
• The Bloor Street shopping area east of Bathurst Street is brimming with trendy restaurants, cafes and nightclubs that attract students from the nearby University of Toronto, as well as a diverse mix of people from all over the city.
• The Bathurst Street shopping area has more of a quieter, residential tone than Bloor Street. It includes small cafes, and professional offices and stores that are geared towards the local home-owners.
• The Dupont and Christie intersection is anchored by a large national grocery store chain that has just recently moved into the neighbourhood.
• The Christie Pits neighbourhood is served by the Bloorcourt Village Shopping District. There is a huge variety of shops and services to choose from along this route.
• Every June, the Bloorcourt merchants host festival days with strolling musicians, bands, clowns, and magicians, performing for the many shoppers in the area.
• Christie Pits residents enjoy the convenience of being located near two shopping malls: the Dufferin Mall, at Bloor and Dufferin Streets, and the Galleria Mall, located at Dupont and Dufferin Streets.

Showing 3 properties out of 4 currently available on the market. 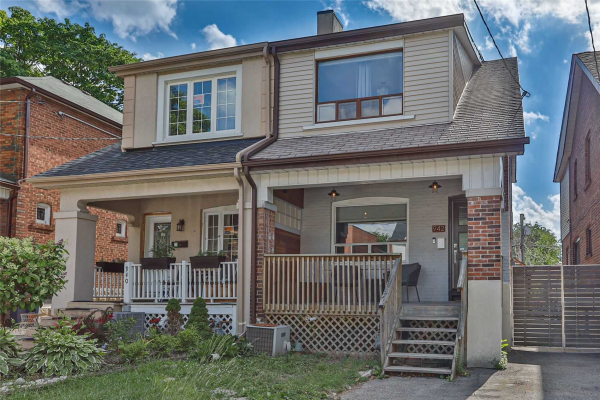