• Parkdale still has many ‘big city’ social problems to contend with. However these concerns are being addressed by a local residents group known as the Parkdale Community Watch.
• The Parkdale Community Watch recently received an award as the best neighbourhood watch group. This award was presented by the International Society of Crime Prevention.
• The Parkdale neighbourhood possesses many positive attributes. It has some of Toronto’s most vibrant shopping districts, wonderful tree lined streets, affordable Victorian homes, and impressive mansions that remind onlookers that Parkdale was once Toronto’s wealthiest district.
• Parkdale is also within walking distance of Toronto’s waterfront parks.
• Roncesvalles is known for its European ambience and small-town feel.This neighbourhood is popular with young families who appreciate the convenience of the location just west of downtown
• The close proximity to High Park,easy access to public transit,and the Roncesvalles shops and restaurants are also popular drawing cards.
• The Roncesvalles Polish Festival,which takes place annually in September,attracts thousands of visitors. Roncesvalles Avenue is closed off for this festival that includes Polish dancers,children’s games and rides,polka bands and lots of food and refreshments.
• Roncesvalles Avenue is said to be a favourite among streetcar enthusiasts,who relish the fact that the stops are distanced far enough apart for the streetcar to build up some speed,and who appreciate the picturesque and lively atmosphere along the route.
• People in Roncesvalles can also enjoy traditional Canadian fare,as well as Greek, Asian, Indian and Thai cuisine.
• No longer the down and out neighbourhood it once was in the late 1900’s, Parkdale is slowly, but inevitably extending Queen Street’s rejuvenation past the Dufferin jog.
• This diverse community is home to Tibetan, North African and West Indian enclaves mixed in with some of Toronto’s best vintage fashion, furniture and fabric stores.
• Popular new bars and live music venues like Wrongbar happily co-exist with pub stalwarts like the Cadillac Lounge and Mitzi’s Sister.

• Roncesvalles was originally settled by Colonel Walter O’Hara in 1850.O’Hara was a soldier in the British army prior to immigrating to Canada. O’Hara was wounded and captured by the French in the Roncesvalles Gorge in northern Spain; hence the name Roncesvalles.
• O’Hara, who was originally from Ireland, named the streets here; O ’Hara, Geoffrey, Constance, Marion and Sorauren are named after his family members, and Fermanaugh is the province in Northern Ireland where the O’Hara clan originated.
• The development of the present-day neighbourhood was spurred on by the street-car, which came to this area in the early 1900s. Roncesvalles was a family-oriented neighbourhood right from the start.
• Nearby industries offered employment to the many British immigrants that settled here. The landmark St.Vincent de Paul Roman Catholic Church on Roncesvalles was the spiritual centre of these first residents.
• Following the Second World War an influx of Eastern Europeans, predominantly Poles, settled in Roncesvalles. They built their own church: St.Casimir’s. Sir Casimir Gzowski, a Polish patriot, settled in Toronto in the early 1850s and was instrumental in the building of Toronto’s roads and railways.
• Parkdale’s history began in the late 1800’s when it was an elite residential suburb, which rivalled Rosedale as Toronto’s most desirable address. Parkdale’s popularity led to its incorporation as a village in 1878. Then in 1889, after many heated public debates, Parkdale’s citizens voted in favour of amalgamation with the City of Toronto.
• Parkdale became Toronto’s playground by the lake in 1922, when the Sunnyside Amusement Park and Bathing Pavilion opened for business on Parkdale’s beaches. Sunnyside was the place to be and be seen for a generation of Torontonians.
• In 1956, Sunnyside was shut down by the city in order to make room for the Gardiner Expressway and a revamped Lake Shore Boulevard. Unfortunately, these new expressways cut Parkdale off from the lake and its glorious past. Parkdale then went into a period of decline that it is still recovering from today.

• Roncesvalles’s housing stock consists primarily of Victorian and Edwardian detached, semi-
• detached and attached homes. These include two-storey, two-and-a-halfstorey and three-storey homes. These brick homes have many whimsical features including Victorian gables, columned front porches and nice interior wood trim.
• Parking ranges from permit street parking to rear laneway parking that may include a garage.
• Roncesvalles has a nice selection of loft conversions, which have recently taken place in former commercial and industrial buildings in pockets of this neighbourhood.
• South Parkdale’s grandiose mansions were built between 1875 and 1895. Some of these houses have been converted into bachelors or rooming houses however the current by laws advocate restoring these houses to single family use.
• The houses in the north end of Parkdale, above Queen Street, are more modest than their South Parkdale counterparts, but are no less charming. These houses were built between 1900 and 1910.

• High Park is a short walk west of this neighbourhood. Visitors to this park can engage in a myriad of sport opportunities, from tennis to fishing in Grenadier Pond. There is also a popular children’s playground and a zoo. Walkers, joggers and nature enthusiasts will enjoy the many trails that traverse this park.
• Local parks include Sorauren Park, at the northeast corner of Sorauren and Wabash, and the Charles G.Williams Park at the southeast corner of Sorauren and Wabash. The Keele Community Centre on Glenlake Avenue has an indoor pool. High Park Library on Roncesvalles Avenue offers programs for children and adults.
• Parkdale is conveniently located within walking distance of High Park and the recreational paths and parks along Toronto’s waterfront.
• Parkdale has four community centres that serve the residents of this neighbourhood. They include Holy Family Community Centre on Close Avenue, Masryk-Cowan Community Recreation Centre on Cowan Avenue, McCormick Recreation Centre on Sheridan Avenue, and the Parkdale Community Centre on West Lodge Avenue.
• The Parkdale Public Library on Queen Street and the High Park Public Library on Roncesvalles, both provide programming for Park
• dale residents.

• The Roncesvalles Village shopping district along Roncesvalles Avenue has a small-town, village feel. Most of the shops and restaurants are independently owned, family-run businesses. However, there are a growing number of chain stores along this route as well.
• Sometimes referred to as “Little Poland,” Roncesvalles Avenue is the perfect place to indulge in traditional Polish culinary delights such as perogies, borscht, schnitzel, sausage, sauerkraut and paczki a round, sugar-coated and fruit-filled doughnut.

• There are several Polish-speaking restaurants, delicatessens and shops specializing in Polish goods on Roncesvalles Avenue. The sign “Mówimy po polsku” (“We speak Polish”) is displayed in many storefronts. The office of Gazeta, Toronto’s Polish language newspaper, is located on Roncesvalles Avenue as is the headquarters of the Canadian Polish
Congress.
• To the west of Roncesvalles, the area is nearly completely residential except for St. Joseph’s Health Centre and a Toronto Transit Commission (TTC) streetcar carbarn.
• A large monument in memory of the massacre of Polish prisoners of war during World War II, and especially the mass graves of officers found in Katyn forest. Fresh wreaths are placed there regularly. Next to it is a memorial to thousands of Polish citizens deported to Siberian Labour camps during the Second World War.

Showing 47 properties out of 52 currently available on the market. 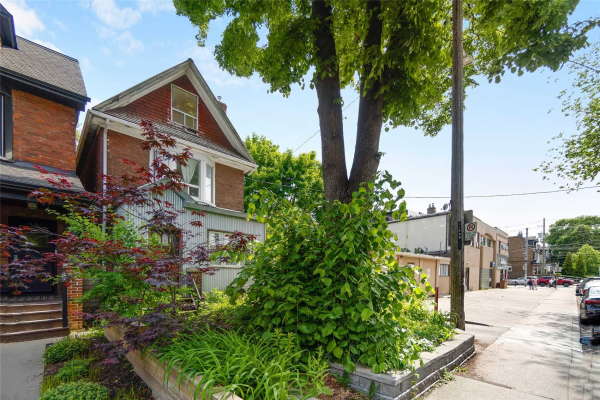 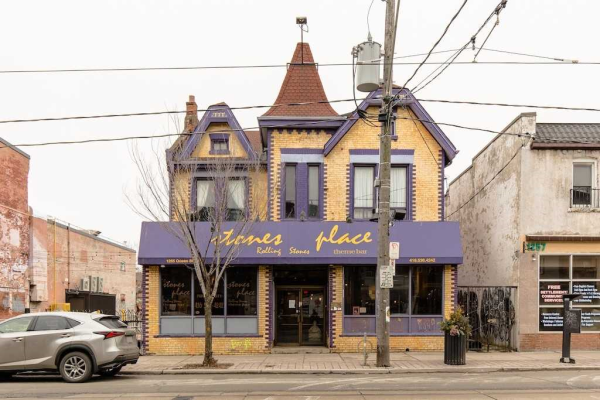 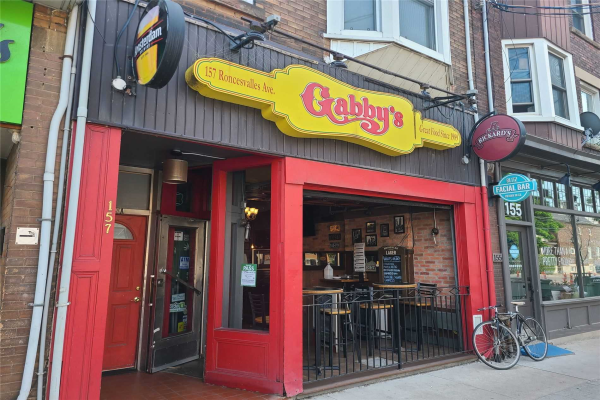 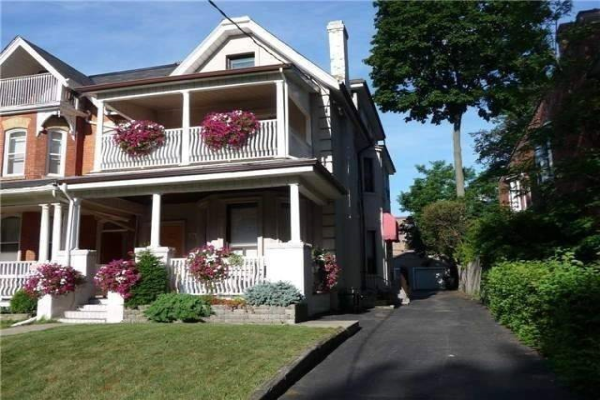 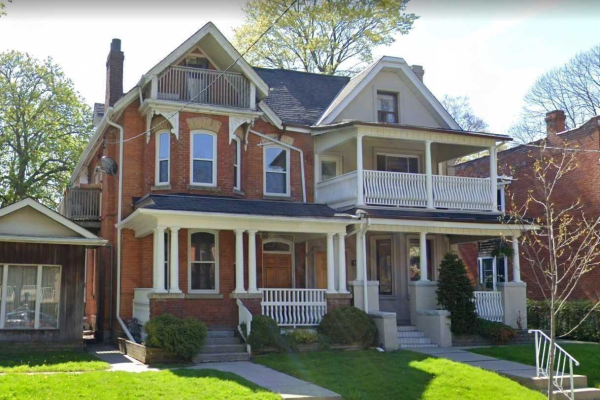